Virtue is made with erythritol and monk fruit extract. 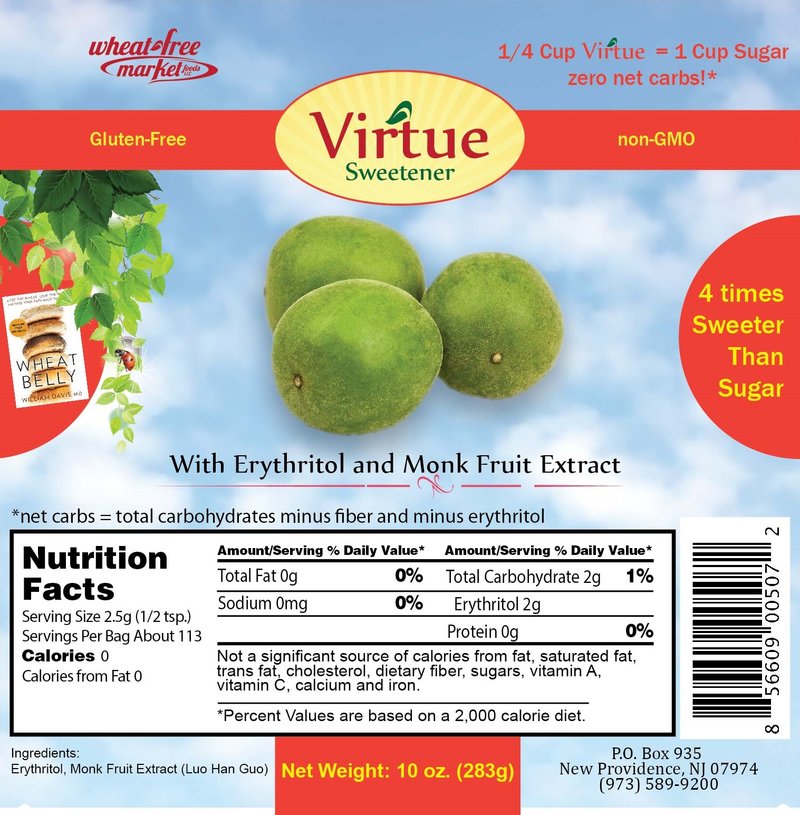 What is Monk Fruit Extract?

Monk fruit extract, also called luo han guo, comes from the bulbous fruit of a perennial vine native to southern China.  This extract is nearly 300 times sweeter than sugar and has been used in China as a low-calorie sweetener for centuries. The fruit is a sub-tropical melon or gourd that has been harvested for several hundred years, first by Chinese Monks, thus the moniker "monk fruit."  It is 2-3 inches in diameter with a greenish color that turns brown when dried.  The Chinese use it for medicinal purposes, such as an herbal tea remedy for coughs or sore throats, as well as a sweetener.

Despite its somewhat "chemical-sounding" name, erythritol is a naturally occurring sugar alcohol (or "polyol") occurring in many plants such as corn and fruits such as apples and oranges. For food production, erythritol is typically extracted from the plants using a fermentation process, so at the end of the process erythritol remains by itself for use in many sugar-free products.

Erythritol yields no increase in blood sugar even with a quantity of up to 15 teaspoons. There are less than 1.6 calories per teaspoon in erythritol, as such it is labeled in the US as zero calorie.  Studies have demonstrated modest reductions blood sugar and hemoglobin A1c (a reflection of the previous 90 days’ blood sugar) in people with diabetes who use erythritol in place of sugar. Unlike sugar that causes dental cavities, erythritol is proving to yield protective effects, cutting the number of cavities observed in children.

Unlike most other sugar alcohols such as sorbitol, mannitol, and maltitol, erythritol does not cause bloating or gas when used in the modest quantities such as those typical in low-carb baking recipes.

More than 80% of ingested erythritol is excreted in the urine, the remaining metabolized by bacteria in the colon (with beneficial effects there, as well, including nourishing bowel flora).

Erythritol provides about 70% of the sweetness of table sugar. It also has a slight “cooling” sensation, similar to that of peppermint, though less intense.